I filmed this buck in one of my favorite whitetail deer hunting videos.

I was looking at whitetail deer hunting videos on YouTube and thought it would be fun to share my top 10.  There are so many to choose from but these are a few of my favorites.

Filming hunting adventures can be a lot of hard work and can be tough. My hunts are filmed. It can be hard to even see a buck like one of these much less get it on film with good light. Therefore, it makes me appreciate the footage in these videos even more. I hope you enjoyed a few of my favorite whitetail deer hunting videos.

What are some of your favorite videos?

This is the potential Kansas State Record Typical With A Bow we filmed in November 2011. He was never recovered.

I wanted to share a story about a potential Kansas state record typical we encountered behind my house deer hunting.

Eight months ago I went to check my trail camera behind the house and was pleasantly surprised when I popped the sd card into my computer, I immediately knew the buck I had gotten a few pictures of was a special buck.

The only thing was I had already tagged out on a nice buck that I filmed myself shooting on October the 18th. For a second I thought I might just hope he would make it through to next deer season and maybe he would be bigger and I could try to match wits with him and maybe get a shot at him myself. Then I thought since my good friend was coming from Georgia to hunt with me this would be a great opportunity to try and help my friend get a shot at a stud. And to get serious about my desire to to become a serious videographer.

So I picked up the phone and told my friend and DHBB Pro-Staffer Troy to take a look at this beautiful buck that had suddenly started showing up on one of my trail cameras behind the house 300 yards from my back door. I still remember the phone conversation we had as we looked at the pictures we were both pumped to say the least, we quickly came up with the name “Horn Donkey” for the brute. At first we figured he would score around 175″ ballpark, but the more we looked at him it started to dawn on us that this buck could possibly be 190″ inches or more.

I did some research and found that the Kansas state record typical with a bow was 193 and some change. So from what we were guessing he would score we were looking at a potential Kansas state record typical. At first the buck was only showing up at night but as each day passed he started showing up more often and just a few days before Troy was to arrive he started showing up at different times during daylight hours. I picked up Troy at MCI airport on November the 8th and to say we were pumped would be an understatement. We had a cold front moving through and it was a very cold rainy day and there was definitely no need for sunglasses.

That evening I decided not to hunt because I didn’t want to get the camera wet and the wind was wrong to hunt the set where the big brute was showing up. So that evening I took Troy to another piece of property and he hunted alone.  We knew we had to play our cards right with this big boy, one mistake could mean the game was over with a smart old buck of this caliber. We knew the wind was going to be out of the northwest the next morning and it was going to be cold and perfect for the stand where “Horn Donkey” was showing up.

Horn Donkey first showed up at night only.

The next morning we woke up early and had breakfast and then took scent free showers and made our way behind my house. The excitement we were feeling was indescribable. That morning we saw  2 coyotes and four bucks, two of the bucks were nice but not the one we were after. It was obvious the bucks were on the move.

Back to the House

After we got situated in the stand I decided to do a short calling sequence. A few minutes later I looked up and holy cow it was him! I immediately knew I was starring at “Horn Donkey”, I eased around to Troy and whispered “get your bow our boy is here!”. Troy said from the look on my face he knew I meant business!

“Horn Donkey” walks to about 20-25 yards away and then stops and stares me down for what felt like forever! My legs were trembling and my hands were shaking. I hid my freshly painted face behind the camera and tried not to blow it for Troy. By this point my heart is pumping out of my chest! I have never seen or been this close to a world class buck.

I was hoping Troy could have shot him when he first walked out. He was 20 yards broadside. But Troy had hung his arrows on that side of the tree and couldn’t get a shot. All the pictures we were getting the buck was coming in from a different way. Of course he surprised us and came from the opposite direction. So my camera arm was in a bind and Troys arrows were in the way.

Finally after filming him for what seemed like forever, Troy was able to get drawn and  shot. We think his arrow nicked a little branch and changed the flight of the arrow. Causing him to hit the buck back. Hitting just in front of the hind quarter. Near the gut and striking the leg bone in the hind quarter on the opposite side. We waited for a while then decided to back out and look at the footage on the television. After reviewing the footage we decided to wait until the next day to start looking. After a long sleepless night the next day around noon we started looking and we found nothing. We called the neighbors and got permission to look everywhere for what seemed like miles.

For the next few months I walked almost daily and never found him. It is just one of those deals in hunting that just wasn’t meant to be. You hunters out there know that it can and does happen. We hate it but that’s the way it goes. We can honestly say we gave it our best shot and it is what it is. It’s not every day you get a shot at a potential Kansas state record typical with a bow. So it still stings a little. Troy will be back in Kansas this November and we will be looking for redemption.

I hope you enjoy this post of the legendary “Horn Donkey”.

It is an unbelievable 265″ buck spotlighted on Midwestwhitetail.com. The buck was taken during shotgun season in Iowa. This buck is just amazing, makes me want to hunt in Iowa. I have seen so many nice bucks come from Iowa, it is definitely one of the places I dream of chasing whitetails one day. I just love looking at hunting videos on YouTube. You run across some really nice bucks on there. This buck is one of them, I had never seen it before but it is really an awesome deer. I wish the hunter had given some details about the hunt. I don’t know any details except it was taken during the Iowa shotgun season. Never the less it is an amazing buck, congratulations to the lucky hunter.

I would love to see a buck like this one day when hunting. We did see a potential Kansas state record typical when I was filming DHBB Pro-Staff member Troy Redner. I’ve never seen a buck of this caliber when I was doing the deer hunting. It would be a dream come true to be able to film my self shooting a buck like this. You have to have a lot of different things go right to see a buck like this. You have to hunt where there are whitetails of this caliber and you have to be a little lucky to and be smart and hunt with the wind in your favor and many other factors also. I was hunting a place where a 220 class buck was seen a few years ago but I never saw him.

My wife and father-in-law were driving down the road where I had permission to hunt and this huge Kansas buck was laying in a field like he was worn out from chasing does. You just never know what you might see in Kansas.

If you have questions or need to contact us feel free to fill out our contact form.

I did a story a while back about a young man from Kansas named Austin and I thought you might like to watch this incredible hunt, it is an inspiring deer hunting video.

Watch this really cool deer hunting video, Austin’s buck. This past season Austin killed a nice 8 pointer with a crossbow. Austin is blind but he doesn’t let that stop him from getting out and enjoying the great outdoors deer hunting. 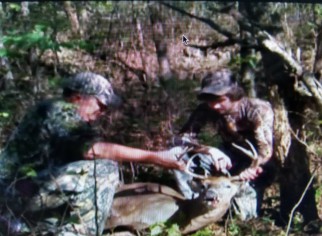 My friend Terry has a not for profit organization that takes kids with disabilities and illnesses out to enjoy the great outdoors. I thought you might like to go by Terry’s website ChaseVideo.org and see the video of Austin killing his buck. Terry takes the time and the effort to take these kids out that might not get the chance to go deer hunting otherwise. It is just nice to see .

Streamlight challenged hunter of the year

Terry received an award this past year, it was the Streamlight challenged hunter of the year award. Even though Terry has cancer he still gets out and takes these kids to enjoy the great outdoors. That is awesome. So go by and check out his website and watch the video of Austin shooting a buck with his crossbow and some of the other videos he has of other kids as well. It is really a good thing Terry is doing for these kids.

On a different note if you are planting food plots this year have you got them planted? Just this past week in the mid-west I saw a lot of farmers planting. I got my garden planted about a week ago. It seemed  like the cold weather would never go away. It was a really rough winter here in the mid-west this year. I heard several reports of bucks being found shed hunting that didn’t make it through the harsh winter. Mother nature can be cruel. That’s why on the properties where I hunt I try to put out some corn when the conditions get really tough.